In mid-March, the European network ranked #3 in number of cash game players, surpassing PartyPoker in traffic for the first time in 4 years. Let’s try to figure out why in this article.

According to the latest cash games data monitored by independent monitoring portal GameIntel, the average number of players per week in cash games (not to be confused with total players online) in iPoker is1,249 (as of March 15). For comparison, the number of cash game players per week at PartyPoker dropped to 1,174. Could be the drop in traffic was influenced by the change of daily leaderboards to HotTables?

Anyway, here are the international top 5 in average number of cash game players on March 20, this time according to PokerScout:

If in the beginning of 2020 the whole network was at level with, for example, a regional room from Ukraine – PokerMatch (10-12 place), then by the fall everything went uphill.

iPoker has confidently entered top 3 of the global pool and perhaps for a long time. The first quarter of 2021 turned out to be especially successful, which exceeded all expectations of the corporation and became the best in the past few years: 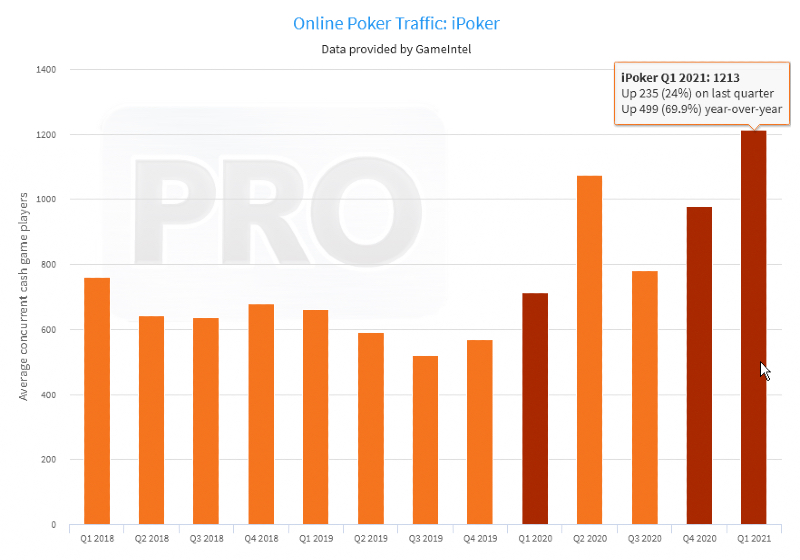 Although a year ago literally, the parent company Playtech suffered huge losses. With COVID-19 outburst, the bookmaker business, which brings the most income, was almost dead. The online poker department brought the corporation back on track.

The growth of the iPoker network traffic is associated with a combination of factors:

Migration of almost 20 skins from MPN network to iPoker (including RedStar and BestPoker);

A license to work in Switzerland, to this day many rooms cannot operate in this country;

However, the coronavirus epidemic had a “positive” effect on most poker rooms’ traffic. Here are some best rooms’ traffic growth stats:

PartyPoker bought out BestPoker bringing the intrigue back

The traffic situation may change in the near future. One of the three poker rooms that generate the most traffic for iPoker goes to PartyPoker network. We are talking here about BestPoker. Entain (PartyPoker room owners) bought a controlling stake in the Baltic gaming operator Enlabs and all its brands, including BestPoker poker room.

The owners of 65.86 million shares (94.2% of the total) agreed to the proposed price. The remaining 5.8% of shareholders will have to submit to the majority. Shareholders will receive 53 Swedish kornor ($6.2) per share. The plan was to close the deal in mid-February, but it happened a month later. The total amount of the deal is valued at around $400,000,000.

For now BestPoker operates as a part of iPoker network, and Enlabs has negotiations with Playtech and its new owners about the future of the room ahead. Most likely, BestPoker and PartyPoker will share the areas of influence. Perhaps the main areas of the room will be Baltic and Scandinavian countries, including Belarus and Ukraine. But there are only our assumptions, we will get the details later.